It is so simple to be happy, but is is so difficult to be simple.

Who is Gururaj Ananda Yogi?

Gururaj Ananda Yogi (1932 – 1988) was born Purushottam Narsinhram Valodia in the province of Gujarat, India, on December 12, 1932 to a well-to-do business and farming family. As a child, he displayed a remarkably advanced spiritual awareness. Already by the age of three, his questions consistently concerned the meaning and purpose of life and the possibility of truly knowing God.

At the age of four, he ran away from home to seek a personal experience of communion with the Divine. He wandered from village to village for nearly six months, living off the food offerings left at temples for the gods. His frantic parents finally found him ragged and barefoot wandering through a village street. When questioned, he explained that he went to as many temples as possible, but the “gods were lifeless and would not speak to me.” 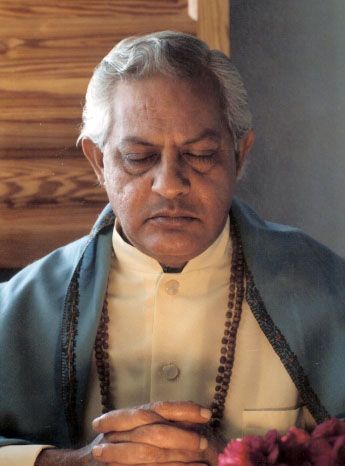 Throughout the rest of his childhood and into his early teen years he lived the normal life of a boy in his culture, but continued his intense desire to experience the reality of God. He was taught various philosophies by gurus he encountered, and at the age of eight was given a spiritual practice by a monk who wandered from village to village throughout the Indian countryside. Then, driven by the fire within him, he again left home at the age of 13 or 14 to continue his search for the peace, integration, and wholeness that is inherent in the realization of the true Self.

To support himself and pay his university fees, he took a job in the film industry, at first performing such menial tasks as sweeping the floors. However, he was well-liked by those with whom he worked. As he progressively assumed more important duties, he came in contact with many influential people. At a gathering in the home of a film financier in Bombay, Gururaj met the cultured, well-educated, husband and father, Swami Pavitrananda. As Gururaj described the meeting, he looked at Swami Pavitrananda and he looked back where, “a spark of communication was set forth though not a single word was spoken.” In subsequent days Gururaj returned to work and school, but the thought of Pavitrananda was constantly in the back of his mind, energizing and inspiring him. 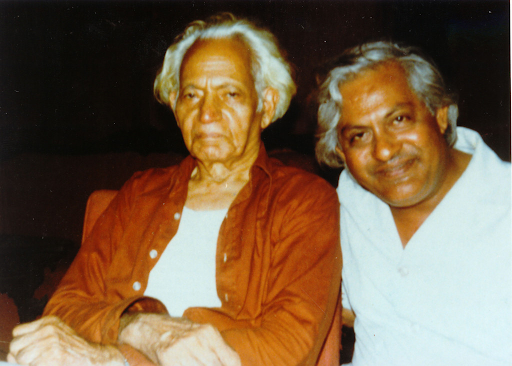 Pavitrananda traveled from ashram to ashram, so when vacation time came, Gururaj went in search of him.

Gururaj had envisioned Swami Pavitrananda welcoming him with all the warmth and love of a father for a son, but on meeting, Pavitrananda said not a word for almost two weeks. In the meantime, Gururaj performed minor housekeeping chores and errands around the ashram. Finally, Pavitrananda spoke to him: “See those papers there. Pick them up!” Only in retrospect did Gururaj understand that Pavitrananda was teaching him, metaphorically, to pick himself up.

Gururaj realized that while other teachers with whom he had studied spoke from the intellect about God, Pavitrananda was a man whose personal experience of Divinity touched Gururaj’s heart and helped him

fulfill his yearning to experience Divinity. During every vacation, he made the trek into the Himalayas to be with Swamiji, as he affectionately called him. This continued until Gururaj had been with him for eight months.

Suddenly one day Pavitrananda said to him, “Let’s meditate.” When they came out of meditation, two hours had passed, but, emerging from a state beyond time, it seemed to Gururaj as though it had only been a few minutes. Everything was covered with a golden haze. In the years we were with Gururaj, he often told his students that he continued to see everything with that golden glow which was visual proof of unity consciousness, or the consciousness of the oneness of all.

After reaching the state of self-illumination, Gururaj returned to his work and studies, though he continued to visit Pavitrananda. Residing in the state of eternal, joyful fulfillment, Gururaj felt that there was nothing the world could offer him that would bring greater happiness and satisfaction. He entertained the idea of living the reclusive life of a monk, but that was not to be. Pavitrananda told him that his dharma, the reason for which he had taken birth in this life, was to teach. He was to share the wisdom gained from the direct experience of Divinity with householders in the Western world. Pavitrananda advised him to establish himself in a Western country and immerse himself in the pains, pleasures, joys and sorrows, problems and solutions of full participation in that life. This practical experience would aid him immeasurably in his work as a spiritual teacher for those in the Western world.

In his early 20’s, having completed his studies in English, commerce, and accounting, he emigrated to South Africa where he had lived with his father for three years as a child, thereby establishing rights of residency.

There he started a business career. Possessing indefatigable energy and a highly refined intuition through his self-illumination, he was extremely successful as a businessman and became the director of several companies. He married, and, with great love and devotion, he and his wife raised three sons and (at the time of his death) two grandsons.

About 1974 Pavitrananda informed Gururaj that his career as a businessman must stop. Gururaj noted that it would take at least a year to bring his ventures to a close. But the “finger of Divinity” pushed him 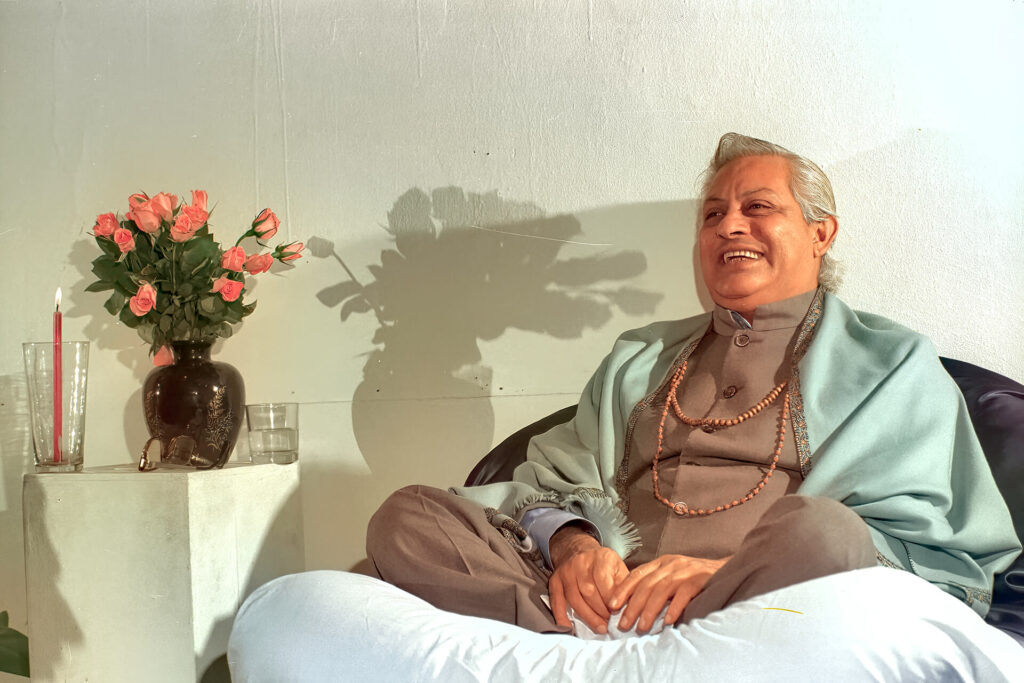 in a different direction. He had a congenital heart defect that suddenly required surgery. His worldly vocation came to an end, and he began his time as a spiritual master.

Some time later, he visited Pavitrananda whom he had not seen in over four years. Pavitrananda was not in good health, but after visiting with Gururaj for several days, he became stronger. During one conversation Pavitrananda said with what Gururaj described as “utter humility,” “Don’t call me your guru anymore. You are my guru.” Then he added, “You have come to release me.” Guruji knew that he was seeing his “father” for the last time. In 1978, while enroute to a British Meditation Society course, Gururaj received word that Swami Pavitrananda had died. But for Gururaj there was no sorrow, for he had risen to a blissful state beyond sorrow where, regardless of who comes or goes, everything is just life.

In 1975 Gururaj founded the International Foundation for Spiritual Unfoldment. He began teaching in South Africa, expanded his teaching to include England, and in 1977 was brought by devotees to America. Eventually IFSU included America, South Africa, England, Canada, Spain, Denmark, Belgium, Ireland, and Israel, and he also taught in Germany and Cyprus.

With inexhaustible energy he traveled from country to country several times each year, holding meditation retreats of about a week at a time.

Often teaching far into the night, he shared the wisdom he had gained from his own experience on the spiritual path. He considered himself a Universalist and taught the essence of the teachings that underlie all the world’s major religions. In the time-honored methods of the oral tradition, he would sit with us, we would ask a question, and he would answer for an hour or so, frequently intuiting the unspoken questions in our minds and answering them as well. He never prepared a talk. He spoke directly from the heart. He never insisted that we believe anything he told us.

Rather, he taught us to experience the welling up of joy that comes when our meditations and spiritual practices have made us receptive to the flow of grace. Sometimes his answers would spring forth in the form of spontaneous songs or poetry, sublime and devotional one minute, humorous the next. We laughed, sang, and danced with him. We ate with him and made our impressions of Indian food for him. Some of us traveled to retreats in the other countries where IFSU held meetings, and a few of us visited him at his home in South Africa. He told us that we would no longer need the outer guru when the connection to our own inner guru was established in our hearts. But few, if any, of us truly believed that we had reached that level of internal communion when we waved goodbye to him in Canada at Easter of 1988. On May 17, 1988, we received word that he had died peacefully at home.

The International Foundation for Spiritual Unfoldment continues to this day to share the teachings and meditation techniques of Gururaj Ananda Yogi.